JKBOSE: Class 10th, 11th And 12th Exams Will Be Held From This Month, Instead Of November-December Session 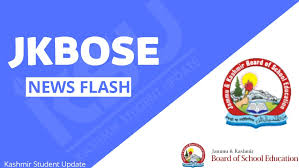 JKBOSE: Class 10th, 11th And 12th Exams Will Be Held From This Month, Instead Of November-December Session

JKBOSE: 10th, 11th and 12th Exams Will Be Held From This Month- Details Here

JKBOSE 10th,11th And 12th Exams: Instead of November-December session, the government is all set to commence with the annual regular board examinations of 10th-12th standard from March. Top officials in the administration informed that it has shifted the examination session from November-December to March.

JKBOSE, Exam Session To Be In March:

Talking to Greater Kashmir, Principal Secretary School Education Department (SED) Alok Kumar confirmed that it had been decided that the session would be shifted from November to March.

JKBOSE ORDER COPY: Principal Secretary School Education Department (SED) Alok Kumar said that things had been finalised and the final order would be issued within days. “We have decided it but it will take us some time to issue a formal order,” he said.

JKBOSE 10TH- 12TH EXAMS: Pertinently, the School Education Department earlier in May has sought a detailed report from the panel constituted for preparing the uniform academic calendar for both divisions of Jammu and Kashmir.

Earlier the Chief Secretary, Arun Kumar Mehta has said that Jammu and Kashmir will fully implement the National Education Policy (NEP) from the current academic session