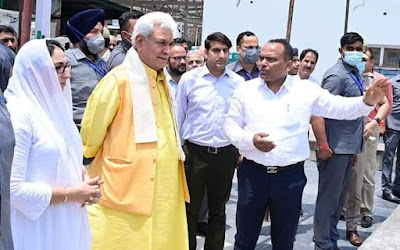 Security forces working tireless to foil all ill designs aimed at disrupting peace in UT; Fresh exams for SI, FAA, JE Civil will be held in October; received complaints of irregularities in these exams; time over when jobs were sold for money

Jammu, Sep 01 (KNO): Jammu and Kashmir’s Lieutenant Governor Manoj Sinha on Thursday said every effort to disrupt peace and to lure youngsters towards drug abuse will face counter-moves as security forces are committed to foil all bids aimed at pushing narcotics in J&K.

Talking to reporters on the sidelines of a function at Jammu, the LG, as per news agency—Kashmir News Observer (KNO), said that on the eve of August 15, he stated that his administration was committed to make J&K a drug free place. “All the efforts being made by (our neighbour) to push narcotics into this side will face a counter move. Security forces are committed and working on multiple fronts including the one to foil all bids being made to push in narcotics consignments into J&K,” he said, adding that “every move aimed at disrupting peace will face a befitting reply.”

The LG stated that all three exams of Sub Inspectors in Jammu and Kashmir Police, Financial Accounts Assistants (FAAs) and JE Civil, that were recently cancelled due to irregularities will be held in the month of October and other vacant positions will be filled within the next six to eight months.

The LG was speaking during the launch of month-long campaign for Nasha Mukt Jammu Kashmir in Jammu. He said that the administration will not tolerate any irregularity and people involved in the recruitment scam will not be spared.

“There was a time when jobs were sold in Jammu and Kashmir but now that time has gone. Only merit and competence of youth will matter,” he said.

He said that some people are trying to bring back the old system again and “involve money in recruitment.”

“We received complaints of irregularities in these examinations. There were doubts among people’s minds. A high-level Committee was immediately constituted to examine (the irregularities). All three exams were found doubtful and cancelled in no time. The probe was handed over to the Central Bureau of Investigations (CBI),” Sinha said.

He said that those who tried to play with career of youth by indulging in irregularities in the exams will not be spared and stern action will be taken against them under law.

However, the Lieutenant Governor said he realised the problems faced by the genuine candidates (due to cancellation of the examinations) but assured that those who have ability will clear the exams again. He announced that all three examinations will be held in the month of October.

Moreover, the Lt Governor said that more vacancies in other departments will be advertised and filled in the next six to eight months—(KNO)