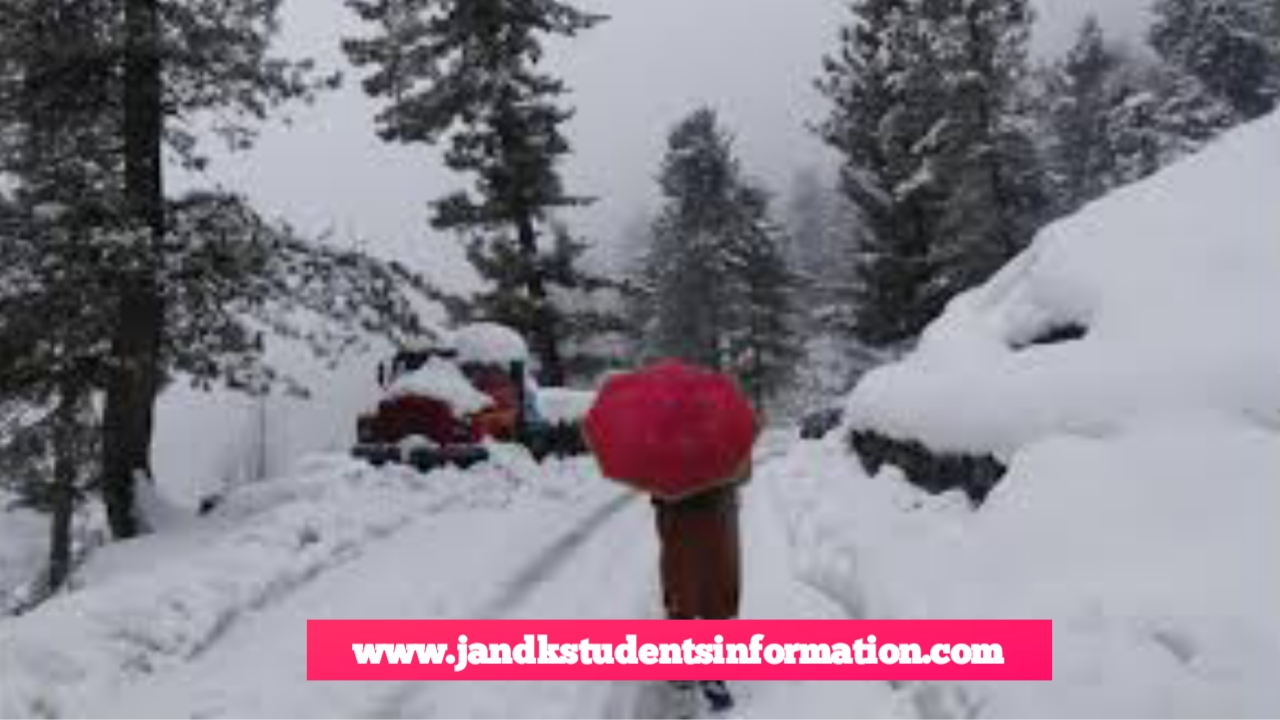 Srinagar, Jan 13 (GNS): Snow and rains lashed most places of Kashmir Valley including Srinagar this morning but weather department here ruled out possibility of any major snowfall in next few days.

A meteorological department official here told GNS snowfall started at most places including Srinagar, Ganderbal, Budgam, Bandipora, Baramulla, Kupwara, Pulwama, Shopian, Anantnag, Kulgam in Kashmir as well as Banihal and Badarwah area of Jammu division this morning. He said it was raining at most places in Jammu including the city since morning.

Reports, so far, suggest that snow has hardly accumulated on the ground in Srinagar and adjoining areas as same was in the form of sleet.

The MeT official said that it was likely to stop gradually in plains shortly whereas it may continue over higher reaches for next 5-6 hours. “No heavy snow is expected in the plains,” he said.

From January 14-18th, he said, mainly dry weather is expected. “From January 19-20th, a fresh WD (Western Disturbance) is likely to affect J&K and adjoining areas.”

Meanwhile, the official told GNS that Gulmarg received 6 cms of snowfall in the 24 hours till 0830 hours today. Qazigun had 3cms, Pahalgam 3.5 cms and Kupwara 5 cms of snowfall during the time, he said.(Heavy Snowfall In Next Few Days) .

Meanwhile, he said, Srinagar recorded a low of 1..0°C against last night’s minus 0.2°C. Today’s minimum temperature was 3.1°C above normal for the summer capital, he said.

Pahalgam recorded a low of minus 2.4°C against minus 1.7°C on the previous night and it was 4.7°C above normal for the place, he said. The coldest night recorded this season in the famous tourist resort in south Kashmir’s Anantnag district was on January 2 when mercury plunged to minus 9.6°C.

Kokernag recorded a low of minus 0.2°C against minus 2.8°C on the previous night, he said. It was 3.4°C above normal for the place.

Gulmarg recorded a low of minus 0.6°C against minus 5.5°C on the previous night, the official said. It was 7.3°C above normal for the world famous skiing resort in north Kashmir’s Baramulla district that saw its coldest night this season on January 2 when minimum temperature plummeted to minus 10.0°C, the official said.

In Kupwara town, the mercury settled at minus 0.7°C against minus 0.4°C on the previous night and it was 2.2°C above normal in the north Kashmir area, he said.

In Ladakh, Leh and Kargil recorded a low of minus 9.4°C and minus 8.6°C respectively, the official said.

Kashmir is under the grip of Chillai-Kalan, the 40-day long harsh winter period that started on December 21. It does not mean an end to the winter either. It is followed by a 20-day-long period called ‘Chillai-Khurd’ that occurs between January 30 and February 19 and a 10-day-long period ‘Chillai-Bachha’ (baby cold) which is from February 20 to March 1.(Heavy Snowfall In Next Few Days)