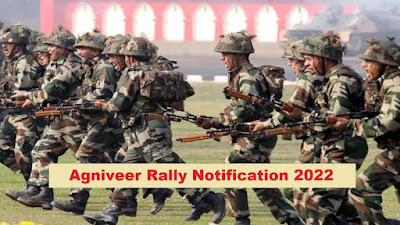 The Indian Army’s Agniveer recruitment notification comes amid the ongoing protests across the country.

The Indian Army on Monday issued a notification for the recruitment of ‘Agniveers’ under the Agnipath recruitment schemes. This notification comes amid the ongoing protest across the country.

The registrations will be opened from July onwards by the respective Army Recruitment Offices (ARO) for Agniveer General Duty, Agniveer Technical, Agniveer Technical (aviation/ammunition examiner), Agniveer clerk/store keeper technical, Agniveer tradesman (10th pass) and Agniveer Tradesman (8th pass as per the ARO rally schedule),” the Army notification reads. The notification released by the Indian Army broadly outlines terms and conditions of service, eligibility, discharge and other important information related to the Agniveer scheme. According to the notification, the candidates will be enrolled under the Army Act 1950 for a service of duration of four years including the training period. The Agniveers will be liable to go wherever ordered, by land, sea or air. The Agniveers will not be eligible for any kind of pension or gratuity.

The service of the ‘Agniveers’ will commence from the date of enrolment. They would form a distinct rank in the Army, different from other existing ranks. “The leave, uniform, pay and allowances during the service period of four years will be governed by the orders and instructions in respect of such individuals issued by the Government of India (GoI) from time to time,” the Army stated. The ‘Agniveers’ will be liable to be assigned any duty in the organisational interest. The personnel enrolled under this scheme will be required to undergo periodical medical checkups along with physical/written/field tests as per orders. The performance so demonstrated would be considered for subsequent offer for enrolment in the Regular Cadre. Agniveers can be posted to any regiment/unit and can be further transferred in organisational interest.