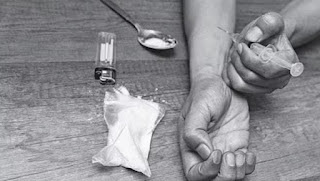 Srinagar:27 June, Drug addiction in Kashmir is increasing at an alarming rate with 10-15 new drug abusers – mostly heroin abusers – brought to hospitals every day while a survey carried by the National Drug Dependence Treatment Centre of AIIMS on the magnitude of substance use in India placed J&K on 5th spot and claimed that over 6 lakh people in the Union Territory were affected by drug abuse.

A psychiatrist at the Institute of Mental Health said that on an average over 50 drug addiction cases are received every day, which includes old cases coming for follow-up treatment.

He said that there was a heroin epidemic as 95 percent of cases were of drug abusers while the trend of female drug addicts had also started now.

The drug menace has become grave in Kashmir and the J&K Police has busted drugs transported from across from Pakistan worth crores of rupees indicating that Pakistan is repeating their Punjab model: ‘First, give arms training and then drugs to youth.”

In September 2021, NIA in a charge-sheet filed in a narco-terrorism case revealed how operatives of banned terror outfits like Lashkar-e-Toiba and Hizbul Mujahideen were behind the J&K drug trade. In 2017, 70 kg heroin worth Rs 500 crore in the international market was seized from Uri in north Kashmir.

Similarly, the Border Security Force (BSF) arrested a Pakistani smuggler near the border fence in Rajatal in Punjab’s Amritsar while six packets of heroin weighing around 6.3 kg and amounting to Rs 30 crore globally were recovered from the possession of the smuggler Kashi Ali.

A European media outlet recently said that 80 percent of drugs or narcotics entering India were infiltrated from neighbouring Pakistan. J&K lies in the vicinity of the Golden Crescent – a name given to South Asia’s opium-producing countries Afghanistan, Iran, and Pakistan – which produces 80 percent of the world’s opium and is considered the prime source of the illicit drug trade.

After the Taliban’s taking over in Afghanistan, there are apprehensions that more drugs could come into India as a report published in 2018 claimed that the Taliban earns 60 percent of the revenue from the drug trade.(GK)