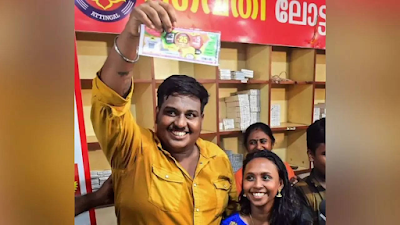 The winning number was selected by state finance minister K N Balagopal in a lucky draw function held earlier in the day at Gorky Bhavan in the capital.. Click here to join telegram study group →

“Initially, I could not believe it and asked my wife to double-check. My god, my number TJ -750605 won the first prize,” K Anoop, a resident of Sreevaraham in the capital, said, adding that he bought the ticket on Saturday night from the lottery stalls of one of his relatives near the Pazhavangadi Ganapati temple in the city.

“I was short of money and was forced to take rest from my son’s piggy box. I haven’t decided how to utilise this amount,” he added. According to the lottery department, Anoop will be getting around ₹16.25 crore after tax deduction and agent’s commission.. Click here to join telegram study group →

Anoop further said that the lottery amount came at a time when he was planning to go to Malaysia for a job at the instance of one of his relatives.

“Pandemic broke our backbone, and high fuel price also added to our woes. I took many soft loans and was planning to leave for Malaysia to improve my financial situation. Now, I will have to rethink,” he said. He said since he wallowed in poverty and penury, he will now spend judiciously. He said he used to buy lotteries regularly and had once got a prize of ₹5000.

State finance minister Balagopal said the state witnessed increased popularity and demand for the Onam bumper this year. The government will increase prize money along the lines of the big middle-east raffles.

“A total of 66.54 lakh Onam lottery tickets were sold this time, beating the last year’s 54 lakh. We are indebted to people who made it a huge success,” he said.

This year’s second prize of ₹5 crore will go to ticket TG 270912. In addition, ten others have won ₹1 crore each.. Click here to join telegram study group →

The lottery department said total revenue from Onam bumper was ₹332.74 crore, and out of this, ₹126 crore will be disbursed in prize amount.

Moreover, last year’s Onam ticket was priced at ₹300, but this time the ticket cost ₹500.

Interestingly last year’s Onam lottery, worth ₹12 crore, was also an autorickshaw driver, K Jayapalan, a native of Kochi. Speaking to a news channel on the eve of the winner’s announcement, Jayapalan said that he took a ticket this time also.He added that though he invested in land and children’s education heavily, he still drives his auto.

“How can I forget my roots? This vehicle gave me everything, so I cannot dump by profession,” he told a news channel on Saturday.

The government-run lottery is a big hit in the state throughout the year and one of the significant non-tax revenue earners besides liquor. “Every day, there is a draw. On average, nine million tickets are sold daily, and at least 100,000 vendors are there,” said an official aware of the developments.

The official said tickets are sold at ₹40, and a seller (vendor) gets a commission of ₹7 per ticket. It provides succour to many differently-abled and economically weaker sections in the state.. Click here to join telegram study group →

In the last Budget, the Communist Party of India (Marxist)-the led government announced a plan to give proper training to winners on how to use the prize money. A study conducted by a government agency last year found that in many cases, the prize money is loitered by the winners.